How can hemp be used for cloth?
The stalk of the hemp plant has two parts, called the bast and the hurd. The fiber (bast) of the hemp plant can be woven into almost any kind of cloth. It is very durable. In fact, the first Levi’s blue jeans were made out of hemp for just this reason. Compared to all the other natural fibers available, hemp is more suitable for a large number of applications.

Here is how hemp is harvested for fiber: A field of closely spaced hemp is allowed to grow until the leaves fall off. The hemp is then cut down and it lies in the field for some time washed by the rain. It is turned over once to expose both sides of the stalk evenly. During this time, the hurd softens up and many minerals are returned to the soil. This is called `retting,’ and after this step is complete, the stalks are brought to a machine which separates the bast and the hurd. We are lucky to have machines today — men used to do this last part by hand with hours of back-breaking labor.

Why is it better than cotton?
The cloth that hemp makes may be a little less soft than cotton, (though there are also special kinds of hemp, or ways to grow or treat hemp, that can produce a soft cloth) but it is much stronger and longer lasting. (It does not stretch out.) Environmentally, hemp is a better crop to grow than cotton, especially the way cotton is grown nowadays. In the United States, the cotton crop uses half of the total pesticides. (Yes, you heard right, one half of the pesticides used in the entire U.S. are used on cotton.) Cotton is a soil damaging crop and needs a lot of fertilizer.

Is hemp legal to grow in the United States?

﻿Yes, thanks to the passing of the 2019 Farm Bill hemp is now a federally recognized agricultural crop. Although, farmers still need to obtain a cultivating license and these laws vary by state.

Why was growing hemp made illegal?

There are several theories as to why hemp was made illegal.

The simplest and most likely scenario is that it simply got caught up in ‘Reefer Madness’ and the ban on marijuana. It was only in the 70’s that THC was identified as the psychoactive ingredient in marijuana. So when marijuana was banned they had no scientific way to differentiate hemp from marijuana and so they just banned it all.

Another theory is that big money industries are the cause. Newspaper publisher William Randolph Hearst led the crusade to ban hemp.  Hearst owned millions of acres of prime timber land and a machine that simplified the process of making paper from hemp had just been invented. Hearst used his power as a publisher to create public panic about the evils of hemp and marijuana.  Another big money player Pierre DuPont held patent rights to the sulfuric acid wood pulp paper process.  In 1937 DuPont patented nylon rope made from  synthetic petrochemicals.   Along with Dupont's backer ,Treasury Secretary, Andrew Mellon, the big money people prevailed and near the end of 1937, Congress passed the Marijuana Tax Act.  By placing a prohibitively high tax on hemp production it destroyed the industry.

How much is the hemp market worth in the United States? 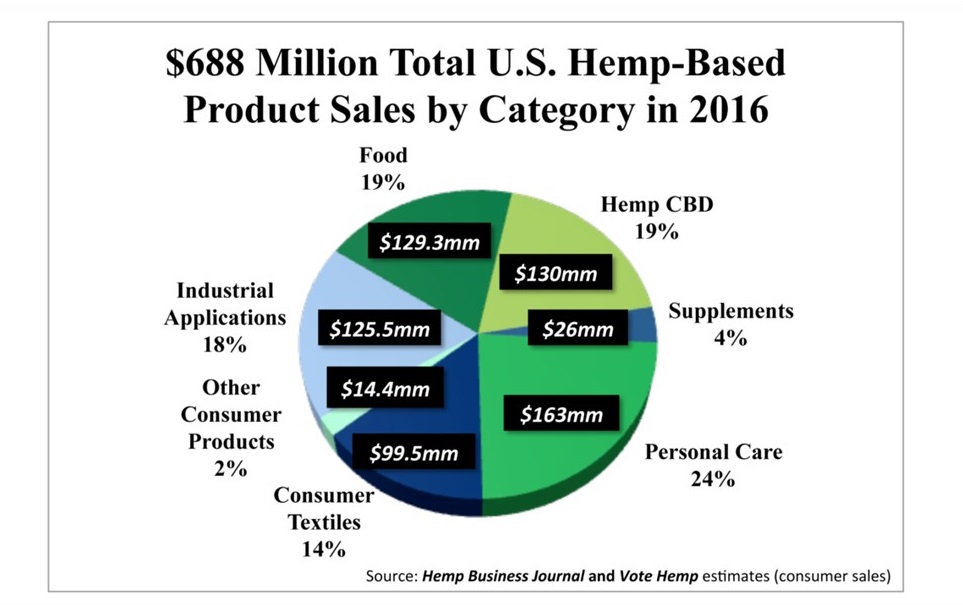 How can hemp be used as a food?
Hemp seed is a highly nutritious source of protein and essential fatty oils. Many populations have grown hemp for its seed — most of them eat it as `gruel’ which is a lot like oatmeal. The leaves can be used as roughage. Hemp seeds do not contain any THC and they do not get you `high.’

Hemp seed protein closely resembles protein as it is found in the human blood. It is fantastically easy to digest, and many patients who have trouble digesting food are given hemp seed by their doctors. Hemp seed was once called `edestine’ and was used by scientists as the model for vegetable protein.

Hemp seed oil provides the human body with essential fatty acids. Hemp seed is the only seed which contains these oils with almost no saturated fat. As a supplement to the diet, these oils can reduce the risk of heart disease. It is because of these oils that birds will live much longer if they eat hemp seed.

With hemp seed, a vegan or vegetarian can survive and eat virtually no saturated fats. One handful of hemp seed per day will supply adequate protein and essential oils for an adult.

What are the benefits of hemp compared to other food crops?
Hemp requires little fertilizer, and grows well almost everywhere. It also resists pests, so it uses little pesticides. Hemp puts down deep roots, which is good for the soil, and when the leaves drop off the hemp plant, minerals and nitrogen are returned to the soil. Hemp has been grown on the same soil for twenty years in a row without any noticeable depletion of the soil.

Hemp has been used to feed many populations in time of famine. Unfortunately, because of various political factors, starving people in today’s underdeveloped countries are not taking advantage of this crop.

How can hemp be used to make paper?
Both the fiber (bast) and pulp (hurd) of the hemp plant can be used to make paper. Fiber paper was the first kind of paper, and the first batch was made out of hemp in ancient China. Fiber paper is thin, tough, brittle, and a bit rough. Pulp paper is not as strong as fiber paper, but it is easier to make, softer, thicker, and preferable for most everyday purposes. The paper we use most today is a `chemical pulp’ paper made from trees. Hemp pulp paper can be made without chemicals from the hemp hurd. Most hemp paper made today uses the entire hemp stalk, bast and hurd. High-strength fiber paper can be made from the hemp baste, also without chemicals.

The problem with today’s paper is that so many chemicals are used to make it. High strength acids are needed to make quality (smooth, strong, and white) paper out of trees. These acids produce chemicals which are very dangerous to the environment. Paper companies do their best to clean these chemicals up (we hope.) Hemp offers us an opportunity to make affordable and environmentally safe paper for all of our needs, since it does not need much chemical treatment. It is up to consumers, though, to make the right choice — these dangerous chemicals can also be used on hemp to make a slightly more attractive product. Instead of buying the whiter, brighter role of toilet paper, we will need to think about what we are doing to the planet.

Because of the chemicals in today’s paper, it will turn yellow and fall apart as acids eat away at the pulp. This takes several decades, but because of this publishers, libraries and archives have to order specially processed acid free paper, which is much more expensive, in order to keep records. Paper made naturally from hemp is acid free and will last for centuries.

How can hemp be used to make bio-fuel?
The United States government has developed a way to make this automobile fuel additive from cellulosic biomass. Hemp is an excellent source of high quality cellulosic biomass. One other way to use hemp as fuel is to use the oil from the hemp seed — some diesel engines can run on pure pressed hemp seed oil. However, the oil is more useful for other purposes, even if we could produce and press enough hemp seed to power many millions of cars.

Why is it better than petroleum?
Biomass fuels are clean and virtually free from metals and sulfur, so they do not cause nearly as much air pollution as fossil fuels. Even more importantly, burning biomass fuels does not increase the total amount of carbon dioxide in the Earth’s atmosphere. When petroleum products are burned, carbon that has been stored underground for millions of years is added to the air; this may contribute to global warming through the `Greenhouse Effect’, (a popular theory which says that certain gases will act like a wool blanket over the entire Earth, preventing heat from escaping into space.) In order to make biomass fuels, this carbon dioxide has to be taken out of the air to begin with — when they are burned it is just being put back where it started.

Another advantage over fossil fuels is that biomass fuels can be made right here in the United States, instead of buying them from other countries. Instead of paying oil drillers, super-tanker captains, and soldiers to get our fuel to us, we could pay local farmers and delivery drivers instead. Of course, it is possible to chop down trees and use them as biomass. This would not be as beneficial to the environment as using hemp, especially since trees that are cut down for burning are `whole tree harvested.’ This means the entire tree is ripped up and burned, not just the wood. Since most of the minerals which trees use are in the leaves, this practice could ruin the soil where the trees are grown. In several places in the United States, power companies are starting to do this — burning the trees in order to produce electricity, because that is cheaper than using coal. They should be using hemp, like researchers in Australia started doing a few years ago. (Besides, hemp provides a higher quality and quantity of biomass than trees do.)

What other uses for hemp are there?
One of the newest uses of hemp is in construction materials. Hemp can be used in the manufacture of `press board’ or `composite board.’ This involves gluing fibrous hemp stalks together under pressure to produce a board which is many times more elastic and durable than hardwood. Because hemp produces a long, tough fiber it is the perfect source for press-board. Another interesting application of hemp in industry is making plastic. Many plastics can be made from the high-cellulose hemp hurd. Hemp seed oil has a multitude of uses in products such as varnishes and lubricants.

Using hemp to build is by no means a new idea. French archeologists have discovered bridges built with a process that mineralizes hemp stalks into a long-lasting cement. The process involves no synthetic chemicals and produces a material which works as a filler in building construction. Called Isochanvre, it is gaining popularity in France. Isochanvre can be used as drywall, insulates against heat and noise, and is very long lasting.

`Bio-plastics’ are not a new idea, either — way back in the 1930’s Henry Ford had already made a whole car body out of them — but the processes for making them do need more research and development. Bio-plastics can be made without much pollution. Unfortunately, companies are not likely to explore bio-plastics if they have to either import the raw materials or break the law. (Not to mention compete with the already established petrochemical products.)